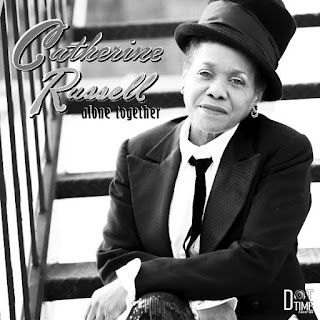 Vocalist Catherine Russell has seen a meteoric rise since the release of her seventh album as a leader, "Alone Together," on March 1st via Dot Time Records. After sitting atop the JazzWeek Radio Chart for five weeks in a row, entering the Billboard Jazz Chart at #6, having been heard on CBS Sunday Morning, and generating rave reviews from Downbeat Magazine, Mercury News, WBGO, Jazz Journal, and other top-tier media outlets, "Alone Together" has cemented Russell’s place as the preeminent song interpreter of her day. On the heels of this great success, Dot Time Records is thrilled to announce the release of "Alone Together" on vinyl. This special edition will be released this next Friday, July 26th, on Dot Time Records.

In coordination with this exciting release, Russell is headlining at Dizzy's Club at Jazz at Lincoln Center from Friday through Sunday.

While 2019 has been a breakout year for the timeless vocalist, Russell has remained a venerable fixture on the musical landscape for the better part of three decades.  Born in New York City, Russell’s family is considered musical royalty. Her father, the late Luis Russell, was a legendary pianist/composer/bandleader and Louis Armstrong’s long-time musical director while her mother, Carline Ray, was a pioneering vocalist/guitarist/bassist who performed with International Sweethearts of Rhythm, Mary Lou Williams and Ruth Brown, among others.

A world-class performer of versatility and virtuosity, Russell has performed and recorded with the likes of Cyndi Lauper, Michael Feinstein, Rosanne Cash, Paul Simon, Wynton Marsalis, Jackson Browne, Dr. John and countless others. She was a member of David Bowie’s A Reality Tour, his last touring band and she is currently on the road with Steely Dan, with whom she has performed since the mid-1990’s. In 2012, Russell won a GRAMMY® Award for her participation in the 2012 soundtrack to the HBO series Boardwalk Empire.

She has appeared on over 200 albums, and with the release of "Alone Together," has seven available as a leader. Her 2006 debut Cat (Harmonia Mundi’s World Village) capitulated Russell on to the scene and garnered rave reviews. “She is a fresh and original voice," wrote Sinatra biographer, Will Friedwald, who picked Cat among his top 10 cds of the year. Russell’s star rose with each subsequent release: "Sentimental Streak" (2006), "Inside This Heart of Mine" (2010), "Strictly Romancin'" (2012), and "Bring It Back" (2014). Her sixth album "Harlem On My Mind" (Jazz Village) received a GRAMMY® nomination for Best Jazz Vocal Album in 2016.

On "Alone Together," Russell reinvigorates rare gems and stalwart standards from the Great American Songbook, lending her voice to the compositions of Nat King Cole, Irving Berlin, Eddie de Lange, Jimmy Van Heusen, Al Dubin, Louis Jordan and Harry Warren. The vinyl edition features 10 tunes including Louis Jordan’s “Is You Is Or Is You Ain’t My Baby” and “Early In The Morning”, the swing-era classic “You Can’t Pull The Wool Over My Eyes”, the tongue in cheek “He May Be Your Dog, But He’s Wearing My Collar,” and the classic “I Only Have Eyes For You”, among others.

Dot Time Records is thrilled to reintroduce "Alone Together" through this stunning vinyl package.  Whether on-screen, on-stage, or through her spell-binding voice, Catherine Russell continues to thrill audiences across the globe.  Please visit Russell’s website catherinerussell.net for the most updated information on Catherine’s touring schedule.
Posted by Arnaldo DeSouteiro at 11:47 PM