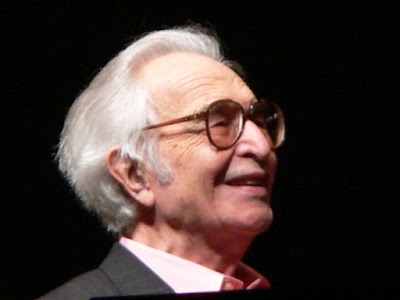 Billy Perrigo talks to the pianist Darius Brubeck about the State Department tours his father, the pianist Dave Brubeck, was involved in from 1958, about the political objective of "cultural diplomacy" as these kind of cultural tours into countries "behind the Iron Curtain" were being called, and the direct response by the audiences in Poland and East Germany. Perrigo also talks to the historian Penny Von Eschen about what the New York Times described as "America's secret weapon is a blue note in a minor key", about the attempts by the State Department to send an image of "racial harmony" around the world to counterbalance the reports of racism in the USA. And he talks to Hugo Berkeley, the director of a PBS documentary on the subject of "Jazz Ambassadors" ( Time). --- John Shand talks to the singer Cécile McLorin Salvant about her latest album "Dreams and Daggers", about not listening to her own recordings unless she has to, about her advice to young singers, "Unlearn everything that was taught to you, and try to sing like your grandmother", about trying to focus more on the "play element" of her music than on how she sounds, to "really explore things and not have it be so sacred and so rigid and stiff", about the influence of Sarah Vaughan, about her choice of repertoire, about singing being her substitute for being an actor, as well as about her dream to return to sing baroque music at some point which would mean taking a pause from singing jazz ( Sydney Morning Herald).

Elizabeth Coady talks to the guitarist Marty Grosz about Woody Allen who "couldn't play jazz" but "owned a clarinet", about his earliest memory of traveling to New York on the S.S. Bremen in 1933 with his family including his father, the painter George Grosz, about his start in jazz, about his father's fascination with "what passed for jazz in Germany before 1930", as well as about the law suits he had to lead to reclaim control or possession of his father's artwork ( Chestnut Hill Local [1], Chestnut Hill Local [2]). --- Jaime Clara reports about the Brazilian guitarist and singer João Gilberto who at the age of 86 lives in "absolute financial hardship". Gilberto had been declared legally incompetent by a Brazilian court and his daughter, the singer Bebel Gilberto, named as his legal guardian. Clara talks to neighbors of the guitarist who attest that they never heard a note from his apartment in the last 30 years ( Infobae).

Martin Laurentius presents a review of what happened in German jazz during 2017 and singles out the visibility of female musicians during that year, from saxophonist Angelika Niescier who had won the German Jazz Award, through panels organized by the German jazz musicians' union UDJ to the appointment of Nadin Deventer as new artistic director of the Jazzfest Berlin. He mentions the discussion of trumpeter Till Brönner's brainchild, a House of Jazz in Berlin and how the IG Jazz Berlin, a musicians' initiative, took part in it. He points out how Tim Isfort, new artistic director for the moers festival, managed to implement his own perspective in the program but also opened it up to a more general audience in the city (asking why that might be necessary in the first place), and he ends praising the drummer Christian Lillinger who won the 2017 SWR Jazz Award ( Goethe-Institut). --- The discussion about how female musicians in jazz are being recognized and treated has reached Germany, and the singers Pascal von Wroblewski and Tom Gaebel explain their own perspectives on it ( Laut).

In a video interview Stephan Mejias talks to the bassist Ron Carter about how he has been looking for a long time to find hi-fi equipment which gave the listener the same sound he could experience in a live concert, but also about how important sound is for his concerts themselves ( Stereophile). --- Gwen Ansell watches the biopic "Kalushi" about South African freedom fighter Solomon Kalushi and finds fault in the use of references to Miles Davis in that movie, especially a supposedly anti-white statement by the trumpeter published in 1985 which the film's protagonist quotes, even though he was killed in 1978, summarizing, "The story of jazz, in Umkhonto we Sizwe culture and Kalushi's life, is far more nuanced - and positive - than a poorly sourced quote from Jet magazine" ( All Africa).

Dale Eisinger talks to the saxophonist Isaiah Barr and the drummer Austin Williamson about their band, the Onyx Collective, about how most of their music is recorded in room-mic situations, about the theatrical or sound concepts behind their music, as well as about the jazz element in their music being, "Do what you want to do and vibe how you want to vibe", yet their music being far beyond what is traditionally labeled as jazz ( Interview). --- Kirk Silsbee talks to the pianist Fred Hersch about success and setbacks during his career, about Thelonious Monk's music which he calls "interesting puzzles. You can take them apart and reassemble [them] in surprising ways", about having been raised Jewish but since having become a practicing Buddhist, as well as about his latest album "Open Book" which has been nominated for a Grammy, like a dozen of his albums before (so far no win, though) ( Jewish Journal).

Emma Maurice looks at the present jazz scene in Pittsburgh, Pennsylvania, and finds its roots in the city's long jazz history. She talks to the musicologists Michael Heller and Benjamin Barson who sees a renewed interest in jazz and at the same time venues closing down as a result of ongoing noise complaints from neighbors. She also talks to the drummer Jeff 'Tain' Watts who grew up in Pittsburgh and who is sure that even though clubs may be closing there will come others to replace them, especially as there is a lot of support, both from Pittsburgh University and from the local jazz community ( The PittNews). --- Eike Wienbarg talks to the German trumpeter Uli Beckerhoff about changes on the jazz scene during the last decades, about his own fascination with the music, about how the live experience helps new listeners to get an understanding of jazz, about the need to have young musicians present their perspectives of the music, as well as about his own road into jazz ( Weser-Kurier).

Will Hodgkinson is surprised by seeing a young crowd attending a concert remembering Alice and John Coltrane and featuring Pharoah Sanders and asks what it is that suddenly seems to have made jazz a cool music for young people. He talks to the drummer Moses Boyd who feels that "this kind of music has something the world needs right now", to Justin McKenzie of Jazz Re:freshed who confirms that "audiences are getting younger by the month" and explains how he handed out flyers at raves, grime clubs, reggae nights for years to get people interested but also says "the challenge is to keep them interested once the hype dies down". He talks to the rapper Nas who sees his act as an extension of his father's (the cornetist Olu Dara's) music, to the saxophonist Nubya Garcia who sees Kendrick Lamar's "To Pimp a Butterfly" as an initiation for the new interest in jazz, and to the saxophonist Shabaka Hutchings who explains that for a long time young people may have thought that jazz was not for them until they saw "Pharoah Sanders looking cool on the cover of [the 1969 masterpiece] Karma and the stigma is broken down" ( The Times). --- Raquel Laneri talks to the pianist Eddie Palmieri about practicing even when he is not at the piano, about Johann Sebastian Bach having been "the first jazz player", about his regular visits to a cigar lounge in Manhattan, about trying to take care of his health, as well as about his dream being to bring the symphonic orchestra he teaches at Rutgers University to Carnegie Hall one day, because he had studied in the Carnegie Hall building when he was 11 years old ( New York Post).

Jim Macnie celebrates The Bad Plus on the occasion of a change in personnel by collecting the concert announcements for the trio he wrote for the Village Voice over the years (and we wish he had given at least the years of their original source) ( Lament for a Straight Line). Giovanni Russonello hears the last concert of the "old" Bad Plus at the Village Vanguard as well as the first album by the "new" Bad Plus ( New York Times). --- Ethan Iverson , the now former pianist for The Bad Plus, has launched a new website, Do the Gig, featuring reviews of a variety of concerts in New York City (Do the Gig ). ---  Ray Funk listens to saxophonist Sonny Rollins' interpretations of Calypso music ( The Guardian, Trinidad and Tobago). --- Jack Van Beynen talks to the New Zealand singer and saxophonist Nathan Haynes who had to give up performing after undergoing throat cancer therapy ( Stuff). --- Nicolas Niarchos talks to the drummer Phil Young about the healing power of jazz ( The New Yorker). --- Vivian Perkovic talks to the German club owner Wolf von Waldenfels about the need for alternative dance and music clubs and why he thinks they should not be publicly funded ( Deutschlandfunk Kultur ). --- Matt Sledge ( The Advocate) and Beau Evans ( New Orleans Times-Picayune) report about the trumpeter Irvin Mayfield who pledged not guilty in federal court to charges of fraud and money laundering. --- Nate Chinen previews some highlights of the upcoming Winter Jazzfest in New York, singling out performances by Yazz Ahmed, Ches Smith's We All Break, Gard Nilssen's Acoustic Unity, Onyx Collective, Stephane Wrembel Band, Rudresh Mahanthappa's Indo-Pak Coalition, Ranky Tanky, Catherine Russell, and Nicole Mitchell ( WBGO).