Vocal Jazz CD of the Month - "Bob Merrill: Tell Me Your Troubles / Songs by Joe Bushkin" 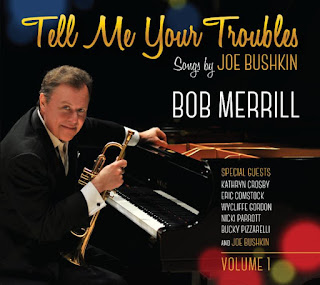 Coinciding with the centennial of pianist/composer Joe Bushkin's birth, the new album by trumpeter and singer Bob Merrill, "Tell Me Your Troubles: Songs by Joe Bushkin, Vol. 1," celebrates the musical legacy of a man who was revered by many of America's foremost entertainers for his wizardry at the keyboard and skills as a tunesmith. He also happened to be Merrill's father-in-law.

Bushkin penned songs with his longtime lyricist John DeVries or the great Johnny Burke in the repertoires of the likes of Sinatra (Joe's "Oh! Look at Me Now" was Frank's first hit), Bing Crosby, Nat "King" Cole, Benny Goodman, Louis Jordan, and countless others.

This first volume of a planned two-album commemorative project pays reverential tribute to Bushkin's oeuvre and its special blend of mood and merriment on contemporary interpretations of 10 songs ranging from the popular to the obscure. The album opens and closes with archival spoken word salutes to Bushkin by Sinatra and comedian Red Buttons.

Cut from the same engaging entertainer's cloth as Bushkin -- not to mention trumpeter-singers like Louis Armstrong, Dizzy Gillespie, Louis Prima, and Chet Baker -- Merrill was already performing crowd-pleasers like "Oh! Look at Me Now" and "Boogie Woogie Blue Plate" (a 1947 hit for Louis Jordan and his Tympani Five) before he met his future wife Christina and bonded with her gregarious father. "These songs have such a timeless, universal appeal," says Merrill. "I really hope the album exposes them to a new generation. Maybe Harry Connick, Diana Krall, Michael Bublé, or even Lady Gaga will give them new life." 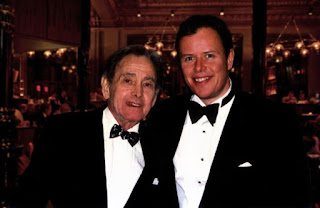 A previously unreleased performance of "Oh! Look at Me Now!," from Bushkin's final recording session in 2003 with Merrill, Howard Alden, and drummer Duffy Jackson, is one of the album's standouts. "Joe's tempo for the song had increased over the years," says Merrill, "but I suggested we slow it down to the tempo of Sinatra's later version, from the 1957 album 'Swingin' Affair' on Capitol." (Pictured at left: Bushkin and Merrill, 2003.)

"I got to spend a lot of time with Joe, always looking over his shoulder, absorbing stuff by osmosis," recalls Merrill, who coaxed Bushkin out of retirement in the early 1990s and performed with him at festivals and clubs such as New York's Tavern on the Green and L.A.'s Jazz Bakery until his passing in 2004 at age 87. He also produced and wrote liner notes for CD reissues of four Bushkin albums, including last fall's release of "Live at the Embers" (Dot Time Legends) from 1952. 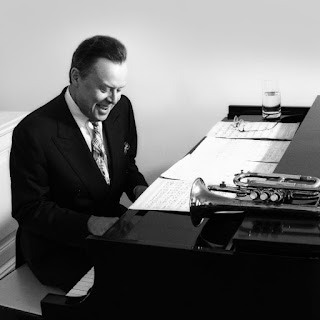 Born in Manhattan in 1958, Bob Merrill traces his early interest in jazz to the fact that Benny Goodman lived in the penthouse of the building he grew up in on the Upper East Side. After his father took him to a Tonight Show taping where he heard Doc Severinsen, Merrill devoted himself to the trumpet (Bushkin's second instrument).

He studied with William Vacchiano, first trumpet of the New York Philharmonic, and received improv tips as a teen from Red Rodney. Merrill attended both the New England Conservatory of Music (studying with Jaki Byard, in whose Apollo Stompers he played) and Harvard, where he co-founded a jazz concert series at the Hasty Pudding Club and led a house band for such visiting artists as Illinois Jacquet, George Coleman, Lee Konitz, and Warne Marsh.

Merrill released his first album as a leader, "Catch as Catch Can," in 1997, the same year he was featured on American Movie Classics leading the AMC Orchestra on the series Gotta Dance! His second album, "Got a Bran' New Suit," featured pianist Bill Charlap among others. It was followed by "Christmastime at the Adirondack Grill," and then the wildly eclectic "Cheerin' Up the Universe" (2015), which featured pianist John Medeski and trombonist Roswell Rudd.