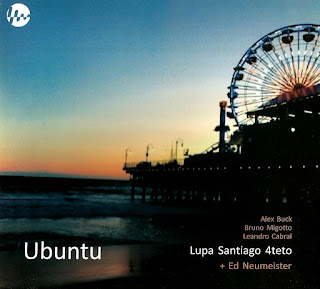 Recorded in November 2014 by Bernardo Goys & Paulo Aredes @ Studio Soundfinger (São Paulo, SP, Brazil)
Mastered in January 2016 by Homero Lotito
Executive Producer: Paulo Aredes
Cover Art: Luciano Murino
Photos: Ines Piquet (cover) & Doris Rothauer (liner)
Featuring: Lupa Santiago (guitar), Leandro Cabral (piano, Rhodes), Bruno Migotto (bass), Alex Buck (drums), Ed Neumeister (trombone)
*********
Lupa Santiago:
"Ubuntu is an ancient African word meaning, “I am what I am because of what we are.” Ed and I met briefly in Austria in 2012, where he lives. This was a special occasion for me because, in the history of jazz, Ed is an exceptional and renowned trombonist, arranger, and composer. After a few emails, we set up a week of shows in Brazil playing my music and his.

When I received Ed’s compositions, I realized how to make the project something even more interesting and bring it all up to the next level: I called Leandro, Bruno and Alex, who are excellent instrumentalists and composers, besides being great friends. Paulo Aredes, an experienced producer from the Soundfinger studio and label, willingly took on the project and contributed with his great ideas. Everything happened really quickly and the band found an instantaneous identity and sonority. It seemed like the compositions had been just waiting for the occasion and the group started to exist that very week! The music of this album is the sum of the cooperation, generosity, warmth and respect we experienced. Our souls, raw, spontaneous, honest…here for all. Ubuntu!”
Posted by Arnaldo DeSouteiro at 8:59 PM