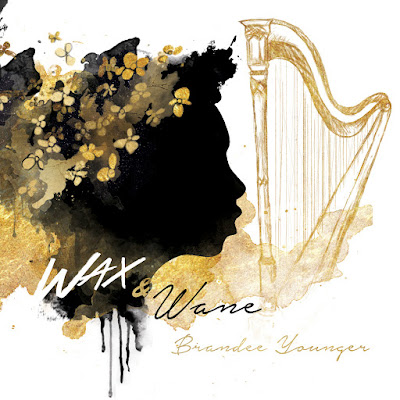 If you like Dorothy Ashby (1932-1986), whose 1968 ground-breaking session for Cadet, "Afro Harping," is a cult album for the hip-hop jazz generation, you'll love Brandee Younger. Her "Wax & Wane" album is a jazz-funk project full of infectious grooves and high musicianship, evoking the past but diving in the future in a visionary way.

Brandee and flutist Anne Drummond, both gifted with flawless technique and "spiritual imagination," act like co-leaders of a tight ensemble, with electric bassist Dezron Douglas shining throughout the album with his "fat" sound connected with the beats propelled by drummer Dana Hawkins. Tenor sax player Chelsea Baratz showcases a warm sound that evoked me memories of Stanley Turrentine's soulful approach.

The opening track, "Soul Vibrations," also was the opener of Ashby's "Afro-Harping album." Written by the late bassist and arranger Richard Evans (who worked a lot not only with Ashby but also with Ahmad Jamal and Ramsey Lewis), it's a good portrait of the album, mixing a wah-wah guitar riff, hypnotic drum beat, a groovy bassline, and impressionistic flute & harp performances.

Like Karas Lamb wrote in the liner notes, this album is "a luminous patchwork that stitches cascading sheets of sound and pulsing arpeggios with the thread of tribute. A kaleidoscopic release that travels straight throughout the heart... a speeding bullet that lands with a burning immediacy that belies the shimmering beauty imparted by Drummond and Younger's band. A solemn prayer to her afro-harping forebears, the album is a fanfare of flight and fancy that speaks to the possibility of Younger's apparent dexterity and the potential of every leader willing to burn the rule book in order to push the culture forward."

Evoking the musical equivalent of rare gems, Brandee Younger emerges from the legacies of Dorothy Ashby and Alice Coltrane as she ushers in a new era that celebrates the unsung titan of string instruments. Born during the REVIVE Music and Blue Note Records sessions for “Supreme Sonacy Vol. 1,” Younger’s latest album, “Wax & Wane” is a testament to her musical forebears that fuses classical technique with the persistent groove at the core of the Black music canon.

“‘Wax & Wane’ represents constant change -- back and forth,” says Younger. “We chose it as the title of the project because it is truly representative of the human experience, as an artist and individual. The high points and low points coloring the continuous struggle for balance at every phase of the journey exist - as they do in daily life - at the core of all of my work. ‘Wax and Wane’ is also the name of one of Dorothy Ashby’s compositions from her album ‘The Rubaiyat of Dorothy Ashby’.”

With “Wax & Wane,” Brandee Younger is poised to take her place as a sonic tour de force and the latest innovator in a lineage of groundbreaking musical agitators leading to the rise of the harp. Spiritually transcendent and perennially fresh, “Wax & Wane” strikes a delicate balance between pushing the envelope and flat out breaking the mold.

“I wanted to place the harp in a totally different context than what listeners are generally accustomed to and continue to position the harp in way that’s relevant today,” says Younger. With this seven track collection, Younger presents an altered universe where the fluttering polyphonic exchange of the harp and flute expand and contract against a dense rhythmic display. usic."
Posted by Arnaldo DeSouteiro at 7:56 PM