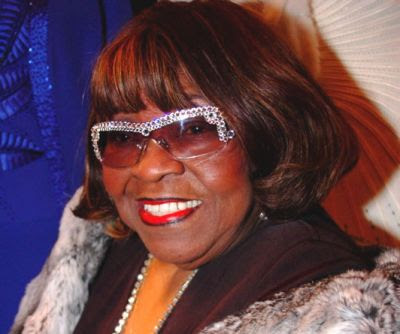 Gospel legend Albertina Walker has passed away. Per the Chicago Tribune “Albertina Walker, the Grammy-winning vocalist known around the world as the “Queen of Gospel” who helped launch some of the biggest names in traditional gospel through her vocal ensemble, the Caravans, has died. She was 81.
Walker died of respiratory complications Friday morning at RML Specialty Hospital in Chicago.” An amazing and charismatic vocalist, Albertina has left her definitive mark on gospel music.
She won a Grammy in 1995 for "Songs of the Church: Live in Memphis," and the following year she co-produced the debut solo album of Faith Howard ("He's Got Everything"), which became the last CD issued in the USA on CTI's subsidiary label Salvation Records, headed by legendary jazz producer Creed Taylor.
**********
http://www.the-savvy-sista.com/2010/10/services-set-for-gospel-great-albertina.html

Memorial services have been set for gospel music great Albertina Walker, who died Friday in a Chicago hospital from respiratory complications. She was 81.
Visitation will be held from 9 a.m. to 6 p.m. CST, on Thursday at West Point Baptist Church on South Cottage Grove Avenue in Chicago, followed by a musical celebration at 7 p.m. at Apostolic Church of God on South Dorchester Avenue.

On Friday, there will be visitation at 10 a.m. CST, followed by a service at 11 a.m. at West Point Baptist Church.

"Michelle and I are saddened by the passing of gospel great Albertina Walker. Growing up on the South Side of Chicago, she started singing in her church youth choir at just 4 years old where she learned to spread the 'Good News' through song. She also performed before President Bill Clinton and was honored at the White House by President George W. Bush for her contributions to Gospel music. And she never forgot to give back, impacting her community through the Albertina Walker Scholarship Fund and many other charitable endeavors."

"Ms. Walker's voice and message has touched congregations across the nation," Obama's statement continued. "Though we have lost an American icon, her influence on gospel music will continue for generations. Our thoughts and prayers are with her family and the countless lives she touched."

Albertina Walker dies at 81; Grammy-winning 'Queen of Gospel'
She helped launch some of the biggest names in traditional gospel through her vocal ensemble the Caravans.
Albertina Walker was nominated for multiple Grammy Awards, winning best traditional soul gospel album in 1995 for “Songs of the Church: Live in Memphis.”
By Howard Reich, Chicago Tribune
October 9, 2010

Albertina Walker, the Grammy-winning vocalist known around the world as the "Queen of Gospel" who helped launch some of the biggest names in traditional gospel through her vocal ensemble the Caravans, has died. She was 81.

Walker died of respiratory complications Friday morning at RML Specialty Hospital in Chicago, said Pam Morris, who coordinated the Chicago Gospel Music Festival for 20 years through 2009.
The singer had been hospitalized since Aug. 29, her 81st birthday, having long suffered from emphysema.

Gospel music icons such as Inez Andrews, Shirley Caesar, James Cleveland, Bessie Griffin and Dorothy Norwood established their careers in the Caravans, who achieved wide fame in the late 1950s, headlining at Carnegie Hall and other high-profile venues.

Through the Caravans, Walker popularized the music she heard growing up on the South Side of Chicago; and the celebrated ensemble in turn made her a legend.

"She was the star-maker," said Norwood, who joined the Caravans in 1954. "She was a great singer — one of the greatest."

Walker played her last major performance in June with a reunited version of the Caravans at the Chicago Gospel Music Festival.

The youngest of nine children, Walker was born in Chicago and reared in the heart of Bronzeville, where generations of African Americans converged during the Great Migration. The vast demographic wave made the South Side an epicenter of jazz, blues and gospel, with Walker — and countless others like her — absorbing black cultural traditions through prayer.

"I grew up going to church," Walker said in 1993. She heard the greatest singer in gospel history, Mahalia Jackson; the founder of modern gospel music, Thomas A. Dorsey; and choirs of such magnificence as to persuade her to pursue the music as her life.

She learned early on that the pay would be slight, or nonexistent. Nevertheless, Walker flourished in Chicago gospel singer Robert Anderson's group, taking over the ensemble when he retired and christening it the Caravans (because "we had people from Gary, East Chicago, South Side, West Side, all over," she said in 2003).

By the mid-1950s, the Caravans began to acquire a national following, setting a new standard for female gospel singing. Never before had so many women who towered as soloists met up in a single ensemble.

Yet it was Walker's decision to yield the spotlight to her charges that propelled these careers.

By the late 1960s, Walker was married and retired from touring, but she eventually returned to the road, singing and recording prolifically. She was nominated for multiple Grammy Awards, winning best traditional soul gospel album in 1995 for "Songs of the Church: Live in Memphis."

"The Lord lets me sing," she told the Chicago Tribune in 2004. "The only time I'll stop is when the Lord says."
Posted by Arnaldo DeSouteiro at 8:44 AM